Post about any bugs or other issues that you find on AAO.

Hi there! I used to use this website a lot when I was younger and I recently started using it again for a fangame that my sister and I have in the works, and I have to say, the editor looks beautiful! Kudos to Unas and the team.

I am, however, running into a consistent problem of which I can't seem to figure out the cause.

User Agent String: Mozilla/5.0 (Windows NT 6.1; Win64; x64) AppleWebKit/537.36 (KHTML, like Gecko) Chrome/81.0.4044.138 Safari/537.36
Link: Here's a save state a bit before the issue.
What happened?: While building a set of investigation blocks, I tried to set up an intro conversation so that there's a default conversation that plays when first showing up at a scene, then, once four different variables are accounted for (advancement1, advancement2, etc), a different conversation which advances the plot past the investigation segment. However, after redirecting out of the intro conversation, the player displays the first text box, and then the trial ends.
What did you expect to happen?: I hoped that the post-investigation scene would continue past that point.
Can you reproduce the problem?: Yes; it happens every time I try to play my trial.
What did you do before the problem showed up?: Here are some screenshots:
Spoiler : Screenshots :

The last frame of the intro conversation with Larry, redirecting outside of the investigation block.

The first few frames of the plot-advancing conversation with Larry. 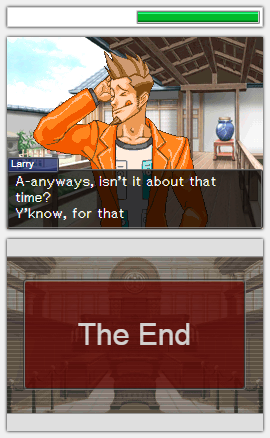 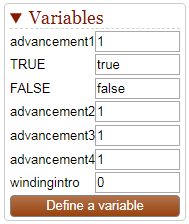 My variables at that point in the trial (if it makes any difference).

Thanks for the report! If this bug is real, it's very serious.

However, I'm not convinced this bug is real just yet. When I try to load your save, there's a warning message that appears. The trial has been edited since the save was created, and this might cause inconsistencies in the game. I wonder if what you're observing is just one of those inconsistencies.

Can you stop editing your trial and give me a new save state that shows the bug? I ask that you not edit your trial again until I let you know that I've reproduced the issue.
[D]isordered speech is not so much injury to the lips that give it forth, as to the disproportion and incoherence of things in themselves, so negligently expressed. ~ Ben Jonson
Current AAO Development Priority: Issue #94: Grayscale Mode

Oh, wow, I have no idea why I didn't think of that. That cleared it right up! Thank you so much for your help.

I won't investigate further, then.
[D]isordered speech is not so much injury to the lips that give it forth, as to the disproportion and incoherence of things in themselves, so negligently expressed. ~ Ben Jonson
Current AAO Development Priority: Issue #94: Grayscale Mode