You're a mean one, Von Karma.

Discuss topics that are unrelated to Ace Attorney Online, introduce yourself if you're new and read the latest Member of the Month interview.

You're a mean one, Von Karma.

Try to read with a karaoke version of the song!

You're a forger, Von Karma
Your objections are full of shit!
Your brain is full of evil, you certainly aren’t lit…
Von Karma…AH!
The only way to possibly beat you is to QUESTION PARROTS!

You are sinister, Von Karma.
Your snaps kill our ears!
You have all the tender sweetness of a seasick crocodile, Mr. Grinch
You are more insane than Luke Atmey and more clever than Dahlia Hawthorne, Von Karma…AH!
Given a choice between you and Hawthorne, I’d…probably still pick you. Yikes!

You're a crappy one, Von Karma.
You're more of an asshole, than…Edgeworth!
Your heart is full of unwashed socks, your soul is full of gunk, Mr. Grinch
Your shoulder’s filled with bloody bullets and all hope has been all lost, Von Karma…AH!
The three words that best describe you are as follows, and I quote
"Shoot, Stab, Scream"!

[Verse 5]
You're a winner, Von Karma!
You're the king of Prosecutors!
Your heart's a dead tomato splotched with moldy purple spots, Mr. Grinch
Your face is a wrinkled grape filled with gray puke spots, Von Karma…AH!
Your soul is an appalling dump heap overflowing with the most disgraceful
Assortment of deplorable rubbish imaginable, mangled up in tangled up knots!


[Verse 6]
You disgust me, Von Karma.
With an emphasis on the ‘DIS’
You're a crooked dirty jockey and you drive a crooked hoss, Mr. Grinch
You’re more crooked than Redd White but more badass than Edgeworth, Von Karma…AH!
You're a three decker sauerkraut and toadstool sandwich with arsenic sauce!

You’re a trash can without the can!


This was fun making. I know it doesn't rhyme, but it's a challenge enough to get it to go with the original song and have it related to Ace Attorney.
As mature as a Seventh Grader. 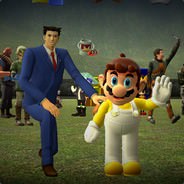