So, some of you may be aware that an Ace Attorney anime was officially announced the other day, to be airing (in Japan, obviously) in the Spring 2016 season!!

Anyways, what are your thoughts???

I'm personally pretty excited, especially since the images of Phoenix, Miles and Maya give the impression that it will occur during the original trilogy arc, as that's definitely my favorite part of the series.
I hope they do a really good job with it! People have been asking for this for 10 years though, so I feel like they'll be anticipating people's expectations.

All I can say is, "it's about flipping time." Wait seriously? That's amazing! I'm not a fan of Anime, but if the anime is even half as good as the games I'll definitely watch it!
Top

Me too! I also think it's cool because the anime airs in the year 2016, which also happens to be the year that the first game takes place in.

That's right! I'm sure it wasn't intended, but it's still pretty cool.
Top

I dunno, I mean, I'm not sure if it was all coincidence.

People have been asking for an anime for a long time (i mean, there's been a movie, even a stage play??), but they probably wanted to see if the series would pan out and still be popular enough in the long run. After all, they only make animes they know they can profit from.
Part of me thinks that they decided they would make one for sure a little while ago and then settled on Spring 2016 because it would give them adequate planning time and also because it's an important date in the AA universe

UPDATE!
Spoiler : :
We just got a sneak peak of the anime...Through a Panchiko commercial.

Questionably. As pointed out on Court Records, Pachinko machines often have their own animation. It COULD be from the anime, but I'm hesitant to say so; the art style looks different from the key visuals we've seen from the little promo material presented thus far (it's most clearly visible in how Maya's drawn and how the shines in the hair are drawn). It could be from the anime but it's difficult to tell right now.

TV Commercial for the Ace Attorney Anime, premiering next month

Confirms the Pachinko machine isn't the actual anime, for one. But wow, this is actually a thing happening. Look at Phoenix riding a bicycle past the cherry blossoms. Our boy's finally a real anime protagonist, folks.

The singer Yasuda Rei will be performing the ending song for the anime, "Message". 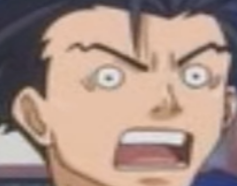 What are the odds on the opening scene being Phoenix hastily running into court because he overslept that morning?
I mean, I can't say I watch a lot of anime (or... any at all since I was about 13), but Japan sure do like their tropes.
Stuff by me: I'm surprised they're jumping straight to some of the JFA characters. Any thought on why they might do that?
[D]isordered speech is not so much injury to the lips that give it forth, as to the disproportion and incoherence of things in themselves, so negligently expressed. ~ Ben Jonson
Current AAO Development Priority: Issue #94: Grayscale Mode
Top

Isn't the AAnime supposed to cover both AA and JFA?

"The Knight of the Iron Hammer, Vita, and the Steel Count, Graf Eisen. There's nothing in this world we can't destroy."
Top
Post Reply
70 posts